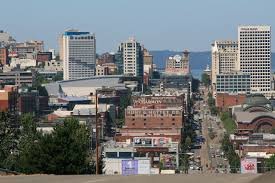 Located in Pierce County, Washington, Tacoma is the second-largest city in the Puget Sound area and the third largest in the state. The city sits 32 miles southwest of Seattle and 31 miles northeast of the state capital, Olympia. Tacoma is one of the fastest growing cities in Washington. In 2016, Pierce County had the 18th highest domestic migration in the United States.

Tacoma serves as the center of business activity for the South Sound region, which has a population of around 1 million. The U.S. Oil and Refining operates an oil refinery on the tide flats in the Port of Tacoma and Joint Base Lewis-McChord operates south of the city. Both supply thousands of jobs to the local economy along with other employers such as MultiCare Health System, Franciscan Health System, Fred Meyer and more. Since the 1990s, developments in the downtown core include the University of Washington, Tacoma; Tacoma Link, the first modern electric light rail service in the state; the state’s highest density of art and history museums; and a restored urban waterfront, the Thea Foss Waterway.

Tacoma offers some of the best parks and cultural attractions in Washington state! From playgrounds, to the Museum of Glass, the America’s Car Museum, the Tacoma Art Museum, Point Defiance and the zoo, the city is brimming with fun things to do! Learn more about these and more fun activities by visiting Metro Parks Tacoma.

With more multifamily sales in 2019 and 2020 than any other agent across Pierce and King Counties, I am your Tacoma multifamily real estate expert! Contact me today for more information about the Tacoma, WA real estate market.